What linux are you using, and why?

First off: this is not a place to debate what linux is best, etc, this is to say what you use, why, and maybe have a discussion with other users about other linux distros they are using, or perhaps discover ones you hadn’t heard of yet.

For me? I use either Ubuntu with the Budgie DE or solus OS itself if it works on the system i want to use it with. But Ubuntu+ budgie gets the best of both of them, the DE that i like and the wide software support of Ubuntu on my “netbook” which is an older Elitebook 8470P.
Random screenshot:

yes Im a Red Team Plus member, hence the background

As the machine is a coding/netbook/light gaming machine, ubuntu with budgie is quite nice. Also Arc Dark Red theme. Because matching colors.

So what are you using and why? Try not to get angry or debate people though, as I’ve mentioned- not what the threads about.

I currently have a lot of systems… 99% of my systems on linux. I’ll post them as I get to them as I am working on all of them today.

First is my desktop.

I’m working on 3 of my laptops today so I’ll post them when I get to them.

As for why on my desktop, because linux is my system. Its the only thing I like to use and that I know how to use. If I could use XP forever I would do that but that isn’t reality so linux it is! I do gaming, video work, everything in it.

Stock Android on my phone.

That’s about it, the three computers I normally use are all W8.1.

I switch between utilising Windows-10, and Ubuntu Studio.

The only hassle I have with Linux is the desktop audio which can be on the ‘tinny’ side compared to the crispness of Windows-10, and I’ve tried most of the settings 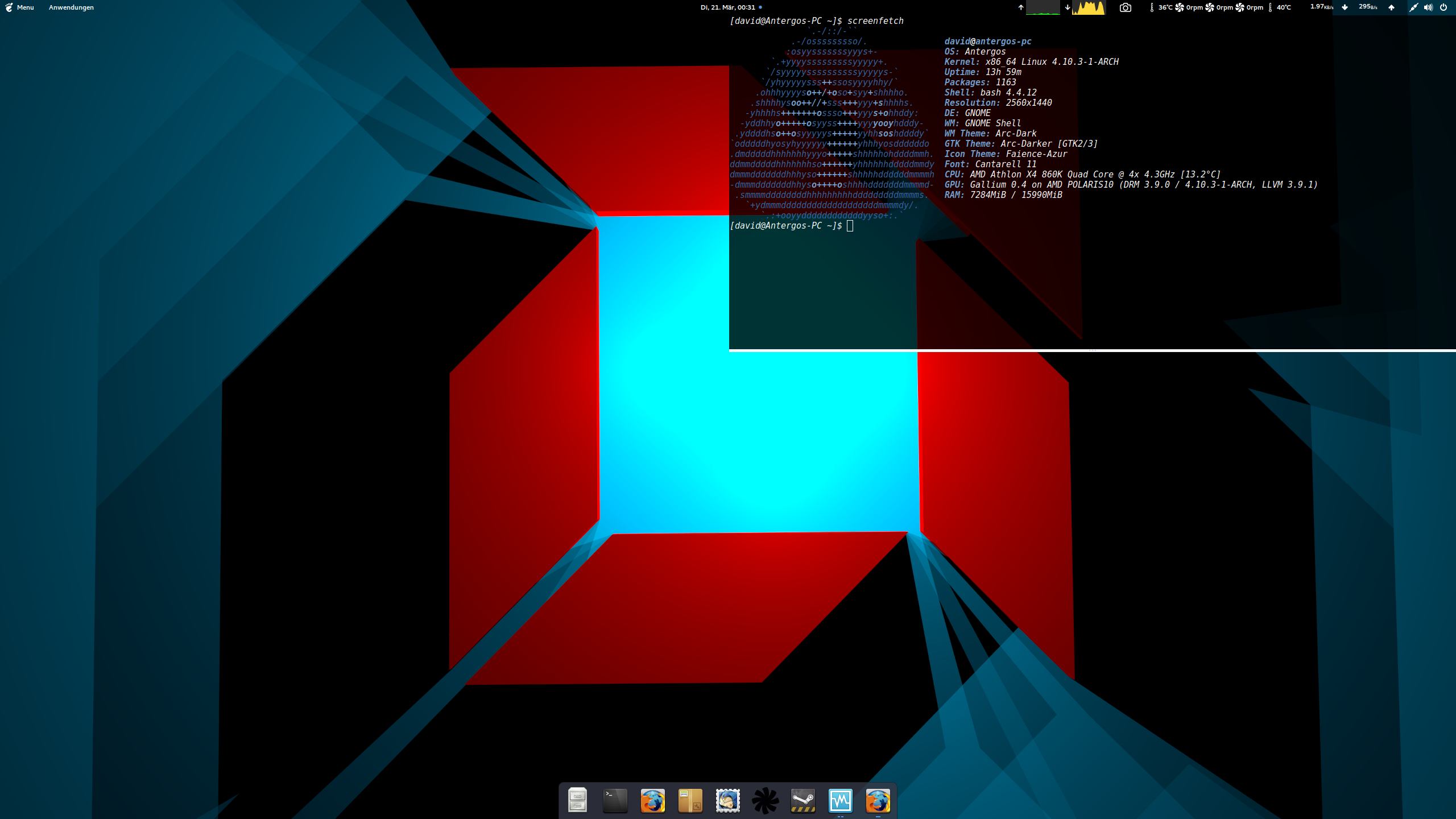 I’m using Arch/Antergos Linux (It is basically Arch, the only difference is an extra repository and a GUI Installation called Cnchi that does all the “hard” stuff for you…but you’ll bug the hell out of “real” Arch Linux users, because you didn’t set it all up yourself…

) because it’s a rolling release. I get security fixes in a matter of hours, the community support is excellent (as long as you don’t go around saying Antergos IS Arch Linux…), the Wiki for Arch Linux is the best there is and it pretty much can do everything very easy. Instead of having to build some packages yourself, just go to the AUR, search for it and install it.

And - you have total control of everything.

I am running a Windows 7 in a VM for some basic stuff (recording Music) that doesn’t run good enough on Wine and have one 60 GB SSD with Win 10, where I follow the progress to tell everyone how horrible it is

And Windows 8.1 on the 120 GB SSD for Elite Dangerous and some other Games, that don’t run well enough on Linux. However, since AMDGPU is kept up do date extremely well, i can run Metro Redux decently enough to enjoy it. FreeSync is missing, but at least I don’t give up all my privacy unwanted.

Im hoping for more games with Vulkan support, since Vulkan runs actually friggin amazing. I do hope though, that i can at least install Security Updates on Win 8.1 manually, once i get an AMD R5 1600X…

Chinchi that does all the “hard” stuff for you

Not sure if intended sexual innuendo.

But i noticed, i spelled it wrong…“Cnchi” does all the hard stuff for you…

Found out about Liri tonight. Totally going to try it out, it looks amazing.

I use Linux Mint, mostly for software development.

I have used OpenSuSE, Sabayon, Debian, Fedora, Mandrake, along with a few others that I didn’t keep very long, hence forgot their names. I am now using TrueOS, which is Unix, but runs all the Linux apps that I like using. I like the fact that it is using the ZFS file system. It is supposed to be self healing, but I haven’t had the time to quite figure out how that is supposed to work, yet. All I know is that it is far more stable than both Win 7, and 10. I have regulated Windows to only being a gaming platform and free telephony device.

I do all of my work on TrueOS, online purchases, and in the process of writing a book with LibreOffice. It is a desktop on top of server of FreeBSD. TrueOS I would say that it is easy to use and to install. One major problem though, some of the games can be difficult to close out so that you can get your work done, like Shisen-Sho. I am soo addicted to it. that and most of the other Mahjongg games that I have come across.

I know that this area is about Linux, but BSD does run Linux applications. And if you do decide to give it a try, I am the last gut that you want to call for help. I am learning most of it by trial and error. Ever since I got roped into Linux, way back when there was Mandrake 8.2, I think it was around in 2000. I was always wanting to be on the cutting edge, that I was always hacking and slashing my system and jamming things where they didn’t belong, but some how it would still work till I would do something really stupid, like shrink my /home partition and expand my /swap partition, and wonder why some stuff vanished.

What I am saying, I broke more systems than you could shake a stick at. Then after my guru passed away, it hurt too much to be in Linux. I went back to just Windows, and once I got fed up with it again, it still hurt to go back into Linux, but my guru, before he passed had told me that I would be great in Unix. He was one of the main developers for DragonflyBSD, and did stuff for FreeBSD as well.

And if you wonder why I kind of telling a bit of history, I am an old guy, will be 67 this year. We old guys blab a lot. LOL Just give TrueOS a try, and if you like it, great, if not, then there are others out there. Just about anything is better than Windows. Why? Because you are in control, not Windows. Enjoy!

I have Fedora on an older laptop I use for just messing around with Linux, light web browsing and travel. If Adobe worked on Linux and a few games, I’d switch full time. When I get an m.2 for my main rig, I’m going to dual boot Fedora/Windows 10. In college I messed around with Ubuntu a little, but its recent builds with all of the social integration junk turned me off.

but its recent builds with all of the social integration junk turned me off.

Wha? Then don’t use stock ubuntu. Its just a marketing thing for that. Use ubuntu mate, its got a lot of interesting stuff in it.

Wha? Then don’t use stock ubuntu. Its just a marketing thing for that. Use ubuntu mate, its got a lot of interesting stuff in it.

Hmm, might have to check that one out. I’ve been really enjoying Fedora though; more-so than when I did run Ubuntu. And the ‘spins’ they do with various desktops (Cinnamon is my favorite) makes it pretty easy.

I also forgot about my Raspberry Pi (Model B, the one with 2 USB and ethernet); I had it setup as a Bluetooth audio receiver for a few months (semi-custom build; used a rough guide from Instructables but I had to rework some of it to make it work), and then as a RasPlex client box for a few years. Now I have it setup with RetroPie.

Well I’ll tell ya canonical has nothing to do with it, thank jeebus. I wish they would die already. The forks are where the real development happens, and if you want my opinion, Netrunner is the best of them all. Though I am biased, its been my mobile platform for 4 or 5 years now…

In any sense, I see Fedora as a workstation OS more than anything else. Unless you want the package manager and the repos, I don’t see a reason to really use it. Ubu Mate, Netrunner, and Arch are the way to go, at least in my opinion. Mate and Netrunner play with Flatpack, appimages, and snaps where I don’t hear much from fedora on that stuff. Appimages some times I guess but only on a podcast I like.

I’m using Gentoo. I need the performance. I like clicking on something and having that something pop up imedietly.

We need @Logan to do a Gentoo install video. It’s not really a need. Just more of a want. But saying need makes it sound more important. So then that way there will be a better chance of it getting produced.

Why Gentoo? It’s the most user unfriendly Distribution i know…

Well Logan can do a install video on any Linux distro. That is, if he wants to. I am in no way forcing him to.

I just thought that if it was Gentoo, advanced Linux users would come on over and help the Crit community become more Linux aware. Not only that, they could also help users of all distro’s with any problem that they may have.

Plus as it is an advanced Linux distro, can you imagine how people would feel once they install and manage it?

I remember thinking about installing Gentoo for the first time. Everyone everywhere was saying how a new comer to Linux shouldn’t. They talked how difficult it was going to be. That only made the emotions run higher during the actual install. And when it booted to the desktop and I was not experiencing any errors, man , I was on the verge of tears. And I was running around the house celebrating like I was part of a World Cup winning squad or something akin to that. It was the best moment of my life.

I’m tearing up right now just thinking about it.

I actually can relate to that with my first and fully manual Arch Linux install. However, since Gentoo does not use precompiled packages, you need to compile them which makes it A LOT more difficult on the first install. Most users do not want that, and this also will not work bringing Linux in to Mainstream. It actually hinders that, because it is extremely time intensive. And yes, i know, Gentoo can use precompiled packages as well, but that’s even harder to set up.

Arch on the other hand is a lot easier in that regard and pacman is a god given tool, that keeps it extremely simple and easy (KISS principle) - even so, Yaourt and the AUR make Ubuntu look complicated in comparison.

The reason why Linux has been creeping slowly into mainstream is that using the CLI get’s optional more and more. Antergos keeps the install process as simple, as it’s even possible. Actually, it’s as simple as Windows 7 (Windows 10 has all that privacy stuff you need to keep track off…clicking “Express” Install makes it even simpler, but…yeah, lets not got there): Put in your name, username, PC Name, a Password, Click what you want on programs, choose the HDD/SSD and that’s it. No need to configure packages or anything.