Firefox is Back | Firefox Quantum is "Faster Than Chrome"

I am writing a post in Firefox, dawn of a new day. I’ve always used Firefox for front-end development because it is light years ahead when it comes to viewing source, messing with CSS in the browser, but it was always slower and clunkier than Chrome.

Here is a short list of what Mozilla is claiming about Firefox 57 (Quantum):

In my own testing, I am seeing that it is neck and neck with Chrome, but slower in HTML5. Hopefully the team at Mozilla keeps moving in this direction.

Here’s a major benefit: you can move away from the “all seeing eye” of Google and start using a browser from a company that has a much better track record (Mozilla). The privacy features are nice and the company credo is one about community and progress over data monitoring and profits. You can stop relying on Google to save your passwords, bookmarks, etc. (all things they use to paint a picture of your digital life) and start using Mozilla. Or, you can just ignore all that and use Lastpass to manage your passwords and forget the rest.

I am going to shift over to Firefox for this week’s Crit Show and I’ll also keep using it at home. After installing a dark theme, it looks a lot cleaner than Chrome (but that’s subjective). 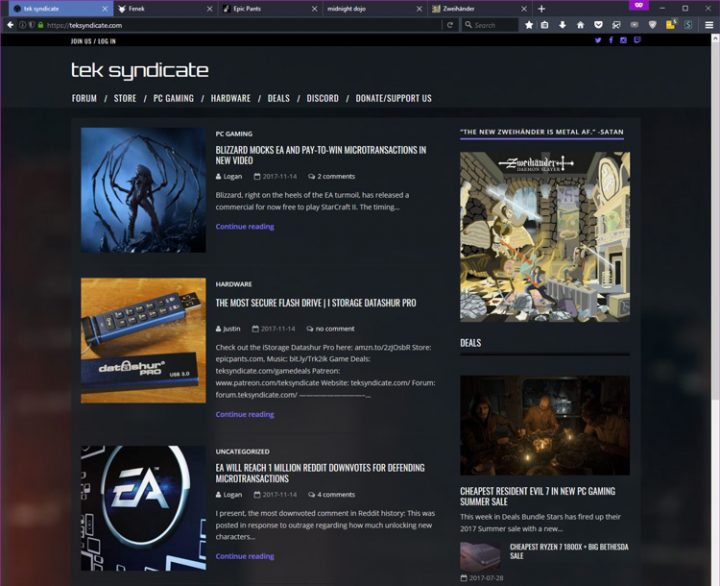 Let me know what you think of Firefox Quantum. Have you upgraded? Will you be moving away from Google and Chrome?

Not sure if it’s updated yet but : https://addons.mozilla.org/en-US/firefox/addon/fxchrome/

Edit : Just updated and it isn’t…yet!

I’m using it, I used the beta for a week or two before the release as well. I love it, it has the snappy feeling that Chrome had but in a Firefox package. I will not be going back to Chrome, this is my new browser.

Where did you get the dark theme?

Also this browser uses way more ram than chrome did for me. But that being said when I close the browser it completely goes away in task manager. As with chrome it will still use a lot of ram after closing.

I love it, it has the snappy feeling that Chrome had but in a Firefox package. I will not be going back to Chrome, this is my new browser.

I used Firefox Nightly for a while and it felt faster than normal Firefox, but it still had the same couple little issues that Firefox always had for me. Most notably, YouTube comments being all out-of-whack (cursor in weird places and not letting me type). I’ve used Chrome since the day it came out, so I’ve always had an affinity for it, so any little error I found in Firefox I would just switch back. Chrome gave me that “it just works” feeling, and I never really understood the complaints about RAM. Maybe just has to do with browsing habits, I dunno. I never had an issue with it.

Even though I love Chrome, I’m always looking for a way to get away from Google products, and I think the new Firefox has finally solved that. I’m not noticing the issues I had before, and I found a kickass Arthas theme.

I never really understood the complaints about RAM

It’s only a problem, when you runt out of RAM, because then it writes to swap. High ram usage is not inherently a bad thing, as long as it released back into the system proper.

A page fault is a type of interrupt, called trap, raised by computer hardware when a running program accesses a memory page that is mapped into the virtual address space, but not actually loaded into main memory. If the page is loaded in memory at the time the fault is generated, but is not marked in the memory management unit as being loaded in memory, then it is called a minor or soft page fault. A major page fault is generated when the system needs to load the memory page from disk or swap memory.

I have swapped to chrome on all of my devices: Windows desktop, linux laptop, and android phone. I am very happy with it so far and currently have no plans of going back to chrome.