So im looking for a new keyboard as my Das is dying, currently using MX Blues however the tactilee bump appears to slow me down.

I often play a game called osu! which requires numerous key-presses as quick as possible, so the quicker the switch the better, since ive been using blues for a while im also considering Browns, apart from the obvious reds for speed, blues also fatigue my fingers extremely quick when playing.

Whats the tactile bump like on the browns? are they like blues just with no audible click or the is the bump a lot weaker than what you get with blues?

Barely noticiable when typing at full speed you have to slowly bottom out the key to even figure out it’s there. There freaking sweet best gaming switch for sure hands down best overall imo as well. Great for long essay’s and word documents and such. Or several hour 2v2 SC2 gold carry’s at 100 APM+. There also THE gold standard in FPS. I wolld specificity go for this model as it’s pretty nice but not to pricey, However don’t spill any drinks on it there not waterproof at all had to replacew one because I bumbed into my desk in the night and it knocked over an ice water that did ot have a lid on it. Was some pretty bad beats. Bought another one though and aside from user error there fantastic only thing arguably better is the k95rgb in corsair’s line up but if you have the extra $$$'s do get the K95 RGB with MX brown’s there indestructible and really well built with that aircraft aluminum backing and all they. Using one for WoW Legion now it’s been amazing along with being able to assign those macro key’s to anything like shortcut’s to specific tools or commands in becnhmarks or adobe photohsop and cs premire is pretty sweet to. I’m also sure the K95 extra key’s could be pretty usefull in Linux distro’s as well. But I’ve never really used anyhting other then Ubuntu or Mint.

Okay cool, i might go reds then, sincee the blues slow me down a lot and cause pain in my hand after a few minuets of constant use, thank you

Browns all the way.

There’s another switch that’s in the Corsair K70 Rapidfire. I think for the time being they’re Corsair exclusive, made by Cherry but there’s some contract or something. They’re like reds, but less travel distance. If you want zero bump and less travel, I’d recommend these.

Also, I personally love the Romer-G switches. They’re my favorite switch; sorta like browns, but the bump isn’t as noticeable and they also have shorter travel distance. Took me a little while to get used to not having to press the key in as far, but once I got used to it they became my favorite.

I just bought a Razer Blackwidow X TE Chroma and I’m already thinking of returning it because I like the Romer-G switches so much. I put some blue dampeners on the Razer switches to reduce travel and quiet them down a bit, but I still prefer the feel of the Romer-G because they’re smoother.

I’m like you, I’ve been using MX Blue’s for years (about 5 now) and wanted to try out some red’s since I wasn’t doing so much day-to-day typing but a lot of gaming. I went ahead and picked up one of these (ok, they aren’t cherry reds, but outemu reds, and are pretty darn close.) Aside from the thing having a ANSI layout (common in N. America) but a OSI (EU) style enter button it’s pretty good for gaming. And you won’t break the bank, and have some nice light up effects (ok, so it’s white LED’s. No big deal.) For the price, and quality I’d say give it a shot.

And no, I don’t work for Monoprice. I just like a good deal.

I ended up getting a Magicforce keyboard with kailh Reds from Amazon. Paid 50 GBP for it and im blown away by it. it feels as high quality as my old Das and a Corsair K65. the kailh switches arent bad, at all, they definitely feel different to Cherry MX Reds however they don’t feel like a cheap copy imo.

Also, for typing and general gaming I definitely prefer these red switches. 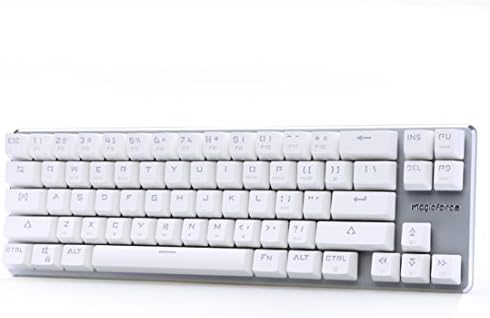 My Corsair is RGB Red, but I wish it was RGB Brown. I shouldn’t complain, because I scored a good 80’s IBM Model M with buckling spring so I got plenty of click.

what does that have to do with computer Keyboards?

i use MX browns

The tactile feel of browns and the tactile sensation of eating delicious food created by the great Mexican people who just happen to have brown skin, how can one not see the connection?

Currently play Osu with browns and don’t really notice much difference between them and reds, in terms of typing though I prefer browns.

gotta have that tacotile feel

I’m personally more of a mango mx magenta guy. Suuuuuper hard to find but really worth it if you can.

I’ve used the Corsair K95 Keyboard with Reds for over a year. Just today, I switched to the G710+ with Browns from Logitech. This is one day, as opposed to a year plus, but I’m really digging the browns. I love the overall feel of them, the tactile feel, without the massive noise of blues (or in my case, my Model M.) The reds are good switches and I have no problem using either, but I think I prefer browns.