What are you chicken?
Screw it I’m getting Bees! 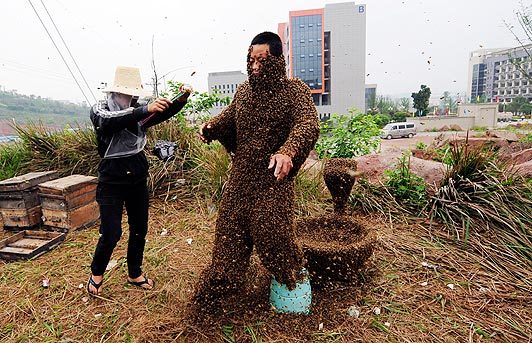 So how did I get here what made me decide to get Bees?
Well Living here in PA after a long cold winter there are several things that I look forward to in the spring. Like riding my motor scooter, day long geocaching adventures and especially setting up planting and working in my gardens. I have flowers in the front of the house and a nice sized vegetable and fruit garden in the back. The vegetable and fruit garden is by far the more rewarding of the two IMO. The flowers and decorative flora are not without gratification making the house look nice and providing a certain amount of privacy on the front porch. There is just something about growing your own food being able to feed yourself from your own property and your own work. Delicious, nutritious tomatoes of several varieties, huge crispy cucumbers colorful tasty and hot peppers. Dark green kale, lettuce and spinach. Celery that will change the way you feel about celery. Cabbage that you never quite know what to do with and anything else that I might decide to grow in any given year. It can be a bit of work at the beginning of the season but You never have to worry about eating any of it you know where it came from, and it tastes so much better than anything you buy at the store. Its good food in every way you can imagine and is a very fulfilling hobby for you, and you family, friends, and neighbors, or anyone else you happen to give fresh homegrown produce to. If you have a yard you should grow some food. you wont regret it.

I always try to change things up in my garden a bit every year. Somethings I have success with others not so much but every year I have a few experiments. This year corn and a combo tomato and cucumber in hanging buckets experiment but I will talk more about them another time. I’m always trying to find something new to do or to grow. For a long time now I have thought about getting a few chickens not a lot just like 2, or 3. I talked to my immediate neighbors about the Idea and they were all for it. My first neighbor was all for it he thought it was a cool Idea and had no problems with it. My 92 year old neighbor on the other side of me got very excited he told me stories about a chicken he used to have at his house when he was a young man after the war before most of the houses on my street were ever built It was a pretty cool story I love hearing bills stories about the way things used to be especially when it’s one that I haven’t heard a few times already.

but as it turns out it’s a bit of a commitment to have chickens today in my neighborhood thats not to say that the ordinances prohibit it but there are a few rules that have been put into place since the days my neighbor used to just let the bird roost in his house and roam the neighborhood when he was at work for the day. and that’s to mention the inherent commitments of having the animals.
You also have to be ready for daily feeding, fencing my yard, and constructing a chicken coop, waste clean up, vet checkups etc. Not to say that Bees aren’t a commitment, and won’t require you to be attentive and care for them. but if you decide to go away for a week you wont need someone to come feed your bees everyday. I mean I have 2 indoor cats and I sort of feel awkward asking someone to feed them every day when I go away. and the thought of asking a friend or neighbor to feed and clean my chicken coop. while I’m gone… lets just say I’m not quite there yet. (Thats not to say that I won’t ever have them. I do still like the Idea but lets see how this bee thing goes first.)

So I knew I wanted to do something like chickens. I wanted to raise something something that would produce and contribute to my garden. “What about bees” I thought. I had always thought that bees were cool since I was a kid I remember going to Trax Farms about 40 min. South of Pittsburgh several times a year with my mother. The used to have an observation hive mounted to a wall near all the bee products that they were selling. I could watch those bees for hours. I would always ask my mom if i could watch the bees while she shopped the rest of the store. I never thought Id have bees of my own. I thought that it would be hard and that I didn’t have enough room where I lived to keep them and that there weren’t enough flowers to support a healthy producing hive. I thought that they were to dangerous to have an a suburban setting. After a few nights of preliminary research Online and a visit to a local community apiary turns out most of what I knew about about bees was wrong. so screw it I’m getting bees.